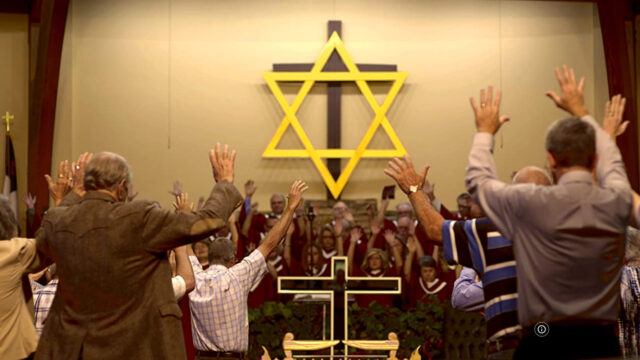 This program has ended. You can watch a recording on our YouTube channel reached through rw4p.org/YouTube.

With an estimated 30 million Christian Zionists in the U.S., it’s important for us to unpack the subject with this movie and discussion. The movie highlights a Baptist church as its pastors encourage an impoverished Kentucky community to donate to Israel in anticipation of Jesus’s impending return.

“As Christian Zionism continues to grow within Western Evangelical churches and para-church agencies, we are reminded that it is now a significant political force in shaping U.S. policy in the Middle East. Additionally, its global reach through satellite broadcasting and the internet adds another significant challenge to Christian missions. Now the gospel of Jesus Christ is represented in a militant, Crusader, Western Zionist construction that is not only hostile to Muslims and Arabs, but is an utter contradiction to the message of love, reconciliation, and good news to the poor and marginalized, whatever their economic status, political orientation, race or creed.”

‘Til Kingdom Come was originally scheduled to be shown on PBS Independent Lens on March 29.

Through the program director at WXXI, our Rochester NY public broadcasting station, we have learned that “After further consultation with the producing partners at ITVS, they (PBS & ITVS) have decided to postpone PBS’s broadcast of ’Til Kingdom Come while an independent review of the film is conducted.” We take ITVS to mean itvs.org.

The ’Til Kingdom Come web site lists a number of cinemas offering the title for streaming @ $12.

We are forging ahead with our plan to host a Q&A featuring Don Wagner and Jonathan Brenneman, both well versed in the subject of Christian Zionism, on April 5th at 8:00 p.m. Eastern.

We hope you will bear with us through this complication, and believe you will find the film well worth the cost. If you choose to not view the film, we are quite sure that you will still find the Q&A very informative.

Rev. Dr. Don Wagner is an ordained Presbyterian minister from the Buffalo, New York area. He served three congregations after graduating from Princeton Theological seminary including a Black congregation in Newark/East Orange, another in Ridgewood, New Jersey and Evanston, IL. He wrote his doctoral dissertation on Christian Zionism while serving as the National Director of the Palestine Human Rights Campaign. He co-founded Evangelicals for Middle East Understanding in the late 1980s. From 1995-2010 he was a Professor of Middle East Politics and Director of the Center for Middle Eastern Studies at North Park University. He became the National Program Director of Friends of Sabeel: North America until his retirement in 2016. He is the author or co-author of five books including Anxious for Armageddon, Zionism and the Quest for Justice (with Walt Davis and the study guide Zionism Unsettled, and Dying in the land of Promise. His memoir Glory to God in the Lowest: Journey to Justice in the Unholy Land is due in late 2021 or early 2022. Don and his wife Linda Kateeb live in the Chicago area. He has three grown children and six grandchildren.

Jonathan is the Communications Manager of Friends of Sabeel North America (FOSNA), a Christian Voice for Palestine.

Jonathan is a Palestinian-American Christian. He grew up in the Great Lakes watershed, St. Marys, Ohio (traditional Shawnee land). He was a frontline activist of Christian Peacemaker Teams Palestine project in Hebron/Al-Khalil from 2012 to 2014. After his time with CPT he completed a Masters at the University of Notre Dame’s Kroc Institute for International Peace Studies. That program included a six month internship in Cape Town, South Africa with Ndifuna Ukwazi, an activist research organization which fights for more just land policies. Jonathan was the Israel/Palestine Partners in Peacemaking Coordinator for Mennonite Church USA, where he facilitated the writing, passing, and implementation of the Seeking Peace in Israel and Palestine Resolution.