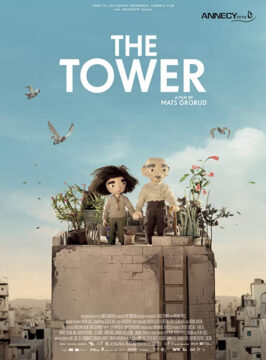 And: Dina Matar, an author whose work informed some of the script

This program has ended. A recording is available through our YouTube channel.

This animated movie follows Wardi, an eleven-year-old Palestinian girl, who lives with her whole family in the refugee camp where she was born. Her beloved great-grandfather Sidi was one of the first people to settle in the camp after being chased from his home back in 1948. The day Sidi gives her the key to his old house back in Galilee, she fears he may have lost hope of someday going home. As she searches for Sidi’s lost hope around the camp, she will collect her family’s testimonies, from one generation to the next.

The film is based on interviews with Palestinian refugees in Lebanon.

Here’s a tip when watching. During the flashbacks, the characters are rendered in two dimensions. Current time shows three dimensions.

Rent the movie (caution: other films have similar titles)

Mats Grorud (1976) is a film director and animator from Norway. He previously directed two short films and has worked as an animator on several feature films, documentaries, and music videos. During his childhood, his mother worked as a nurse in refugee camps in Lebanon. In the 1990s, Mats studied at the American University of Beirut, Lebanon while working as an English and Animation teacher in the Burj el Barjaneh refugee camp. Based on the testimonies of the refugees and his experience, he wrote the script and had his director debut for his first-feature film, The Tower.

The film premiered in 2018 and has since then won several prizes and has been screened at around 200 International festivals all over the world.

Dr. Dina Matar works at the School of Oriental and African Studies, London where she chairs the Centre for Palestine Studies along with teaching and research. She researches and writes on politics and communication, memory cultures, narrative and politics, activism and media. She is the author of “What it Means to be Palestinian” (2010) which informed some of the stories in the film. She is also co-author and editor of several books. Before joining academia, Matar worked as a journalist/editor in the Middle East, Asia, the UK, and the US.