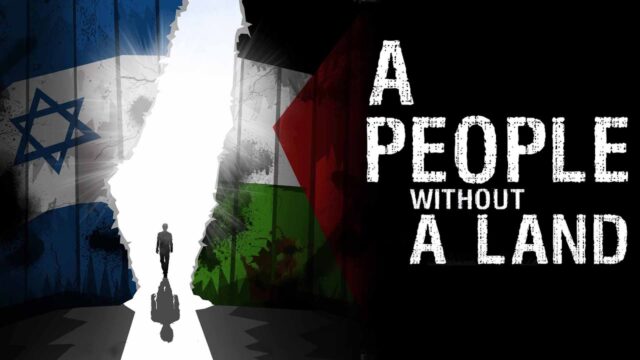 2014 Documentary ~ 78 minutes ~ English with some subtitles

Registration is closed. This program has ended.

We like to program one “history” film per cycle. This is our pick for 2020, which covers the 1948 Nakba forward. More than three dozen experts guide us on our journey.

Settlement expansion across Palestine is out of control. Is the patchwork of remaining Palestinian land now so fragmented that it could never be a viable future state?

For decades, the prevailing wisdom has been that the solution to the conflict would come in the form of a two-state solution. Typically, this is formulated as an Israeli withdrawal from the West Bank and the establishment of a Palestinian state there and in the Gaza Strip. Unfortunately, with half a million Israeli settlers living throughout the West Bank and millions of Palestinian refugees demanding to return to their hoes in Israel, the two-state solution no longer seems practical.A People Without a Land explores the notion that the only real solution to the Israeli-Palestinian conflict is a one-state solution. Spending time with people from across the political spectrum, including settlers, politicians, activists, and unique individuals who have successfully crossed the ethnic divide, this film explores the challenges that lie ahead as well as the possibilities that such a solution might entail.

Eliyahu Ungar-Sargon is an award-winning filmmaker who has spoken and written extensively about issues of human rights, religion and politics. He self identifies on Facebook as a “Jewish rebel.” He moved to Israel with his family when he was 13 and grew up in a Zionist environment. He said, “I’ve been publicly questioning since I’ve been making films.”

His first feature length documentary, Cut: Slicing Through the Myths of Circumcision (2007), received critical acclaim and helped define an emerging global conversation about the conflict of values inherent in this ancient practice. In addition to the film, he has produced a podcast series and published a peer-reviewed article on the ethics of circumcision. His second feature-length documentary, A People Without A Land (2014), offers a new way to think about the Israeli-Palestinian conflict and has won multiple awards and screened all over the world. Ungar-Sargon’s writings on Israel/Palestine have been published in Jewschool, The Electronic Intifada, and Muftah. He also directed and edited Questions of Life and Death (2004), a short documentary featuring an Israeli assassin. Ungar-Sargon has extensive editing experience, and was a contributing editor on the short narrative film, Sisterhood of Night (2006). Additionally, he served as a guest lecturer in the Film, Video and New Media Department at The School of the Art Institute of Chicago. Ungar-Sargon was born in London, England, raised in an Orthodox Jewish home in Brookline, MA, and moved to Israel when he was 13. His educational background includes rigorous training in Jewish studies as well as several years as a medical student. He holds two degrees from the School of the Art Institute of Chicago; one in film, and one in the fascinating field of cognitive film theory.

A People Without A Land (2014), feature-length documentary (Director)

Cut: Slicing Through the Myths of Circumcision (2007), feature-length documentary (Director)